On Saturday, August 13, the Columbia Memorial Space Center will honor Dr. James M. Busby with a plaque and remembrances.

If you have any questions, please contact Arlene Busby at arlenejbusby [at] yahoo [dot] com 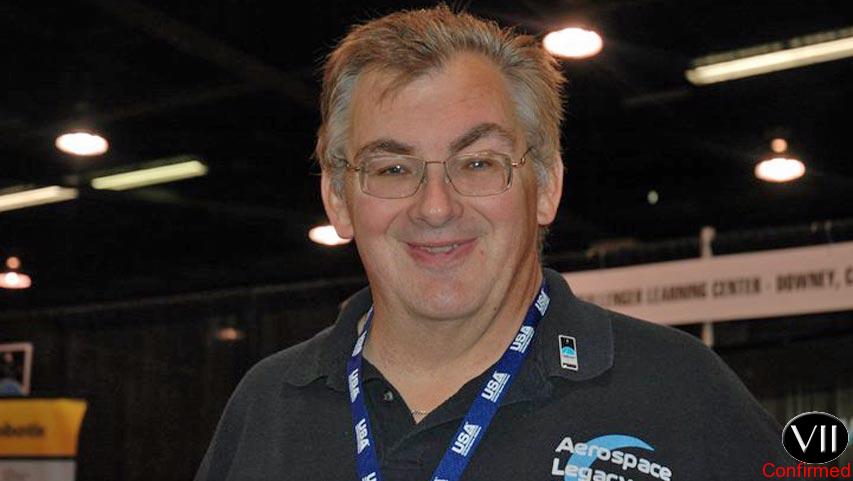 The space community has suffered a great and profound loss. James Milton Busby, a dedicated space advocate and historian,  and a great friend to many spacers and science fiction fans, passed away on June 1, 2016. Now Jim gets to go roam all the stars and planets and phenomena to which he introduced so many of us.

Space flight historian James Milton Busby died June 1 after a lengthy hospitalization. He was 61 years old, and had suffered many health problems in recent years.

He is survived by his wife, Arlene, a longtime Los Angeles Science Fantasy Society member. They married in 2012.

James volunteered and consulted with the California Museum of Science and Industry in Los Angeles on the 1980 redesign of their aerospace museum. He was hired in 1984 as a museum assistant and was employed there until 2003. The museum awarded James with an Honorary Doctorate degree of Space Science Information.

He was part of the Organization to Support Space Exploration, the first group to do historical recreations of the Apollo Moonwalks. In 1979 they became involved with Rockwell International’s speakers bureau in Downey, Ca. where James was master of ceremonies for the open houses and astronaut visits to the plant from 1979 until he plant closed in 1999.

In 1994, he assisted in the Universal film Apollo-13 and participated in the Tom Hanks-produced Apollo miniseries From the Earth to the Moon as a technical advisor, historian — and actor. He appeared as a “pencil tapping Lunar Module designer” in the fifth episode, “Spider.”

James was employed in 1999 by the Space Frontier Foundation as Director for its International Lunar Conferences for two years.

He also worked in space suit sales and rentals at Global Effects in Hollywood.

He served on the History Committee for the American Astronautics Society, and frequently wrote for Space Times magazine and Apogee Publishers Mission Report book series.

In 2006 he joined XCOR Aerospace in Mojave, Ca, to rebuild their media relations.

Late in life he was part of the Aerospace Legacy Foundation of Downey, CA and had been trying to raise funds to represent ALF at Spacefest VII next week in Tucson.

The family would be grateful if you would make a donation in Jim’s memory to continue his life’s passion to educate and preserve space to the Aerospace Legacy Foundation.

Sunday will mark the fourth time that Blue Origin will launch and land its New Shepard rocket, which is being developed to take passengers on suborbital space flights. So far, we haven’t gotten to see any of their launches. According to a tweet from CEO Jeff Bezos, the company is aiming to launch on Friday and the launch will be live streamed at the company website, https://www.blueorigin.com/

But what if something goes wrong? On this flight, something will go wrong…on purpose. Two of the parachutes are set to fail during descent, to test the backup systems to make sure people would be safe in such a scenario. 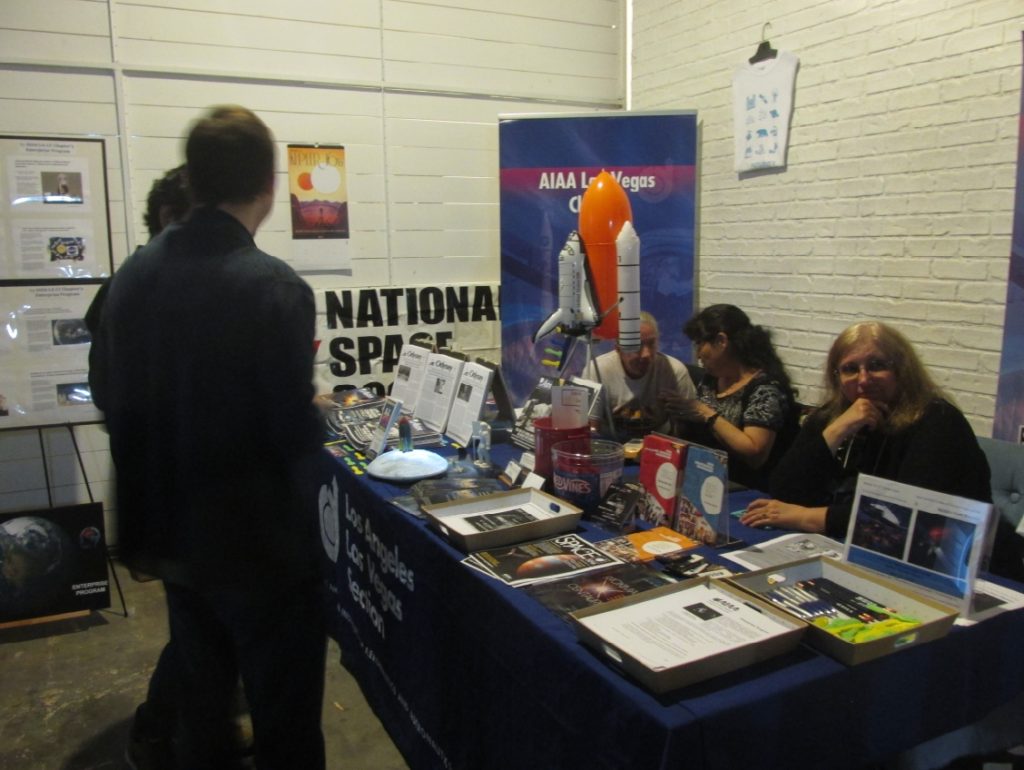 On May 14, OASIS, Three Dimensional Science Learning and the American Institute of Aeronautics and Astronautics, Los Angeles-Las Vegas Section co-sponsored “Harley Cortez: The Artist as Spaceman,” a meeting of the artist and space science communities. Over the course of the evening, artists and scientists found that they had more in common than previously realized. They share a love and enthusiasm for their work, and see its beauty.  The photo shows the OASIS and AIAA-shared table. Left to right behind the table: OASIS member Gareth Powell, OASIS vice president and AIAA LA-LV newsletter editor Lisa Kaspin-Powell, AIAA LA-LV Programs Co-Chair Dana Puschell.

The festivities were hosted at The Paper Agency Art Gallery, a creative art collective in downtown Los Angeles. 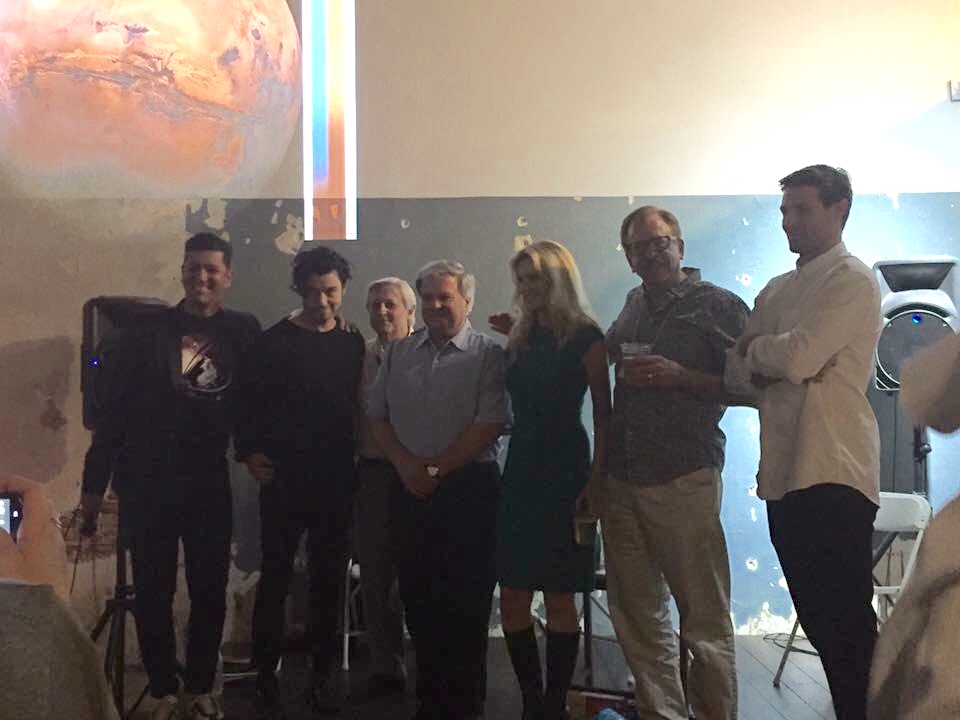 The art and science communities are saddened to announce the passing of The Paper Agency owner and founder Dave Frey, a conceptual designer and artist. Dave and his team worked selflessly and tirelessly to make “Harley Cortez – The Poet as Spaceman” a collaborative event between the AIAA LA-LV section and NSS-OASIS; as the first-of-its-kind STEAM event in Downtown Los Angeles, the evening’s programming was a brilliant success. Dave and his gallery team put forth tremendous effort in providing key architectural support in gallery space, painting, hammering, building, cleaning, offering technology hardware and software logistics in bringing together the art and science communities under one roof on the night on May 14, 2016. It is interesting to note that this event also happened to coincide with National Astronomy Day. The energy was social, open and electric in a community merging two amazing communities. The evening agenda covered everything from conversations between art and science with an interpretive discussion panel, technical discussions by Dr. Nahum Melamed on Near Earth Objects – Asteroids and even a presentation by famed Dr. Jeff Puschell on satellite earth mapping and global perspectives on climate change. Dave and the AIAA LA-LV team were in the midst of discussing future collaborative gallery projects on a MARS art and music theme tribute event (David Bowie, SPACEFACE animation film and dedicated technical presentations on MARS). Having worked with Dave, we are at a huge loss; however, we know that he would have loved for the show to continue. To continue such events will only be a fitting way to honor Dave’s memory and further details are planned. For more information please contact Rick Garcia of the AIAA LA-LV section: rickpositive76 [at] yahoo [dot] com.

You are invited! Passage To Mars – Special Screening! May 31 – June 5 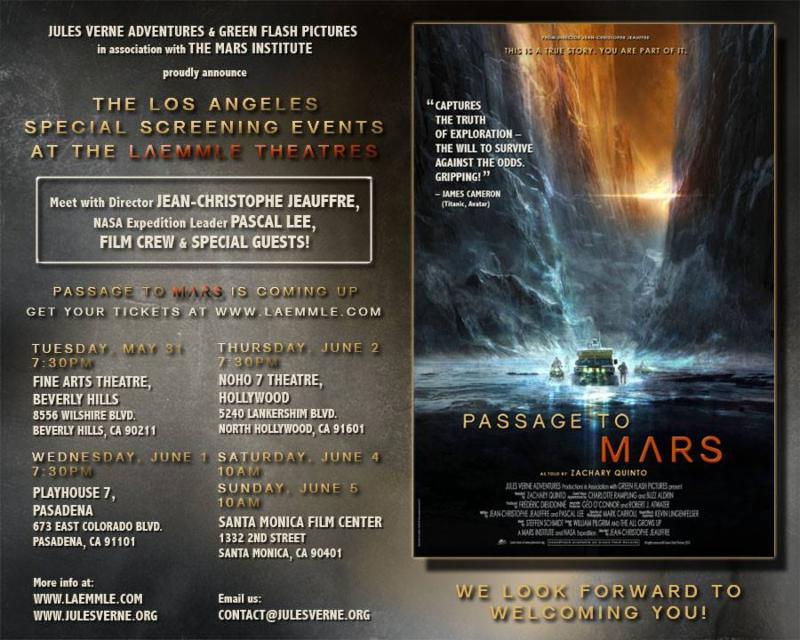 Then, at 2:47 PST to loud cheers at SpaceX and elsewhere, the first stage landed upright on the “Of Course I Still Love You” drone ship, 400 mi (680 km) off the coast of Florida. This is the second of hopefully many ocean landings! The first stage had to survive a much faster and hotter re-entry with much less fuel for landing, as with the previous successful landing.

And finally, at 3:11 pm, Thaicom 8 was deployed, ultimately to circle the Earth at 36000 km Super Synchronous Transfer Orbit. By contrast, the International Space Station is at a close 350 km (in LEO). Thaicom 8 will provide service to South Asia and Southeast Asia. The satellite is over 3000 kg and is designed to operate for 15 years.

On the telecast, SpaceX personnel noted that they would soon attempt to land and reuse the payload fairing. Where are they going to find space for them, with all of those recovered 1st stages?

Congratulations to SpaceX on another success!

UPDATE: The spacecraft has acquired signal – confirmed by Orbital ATK

Here are some  photos from Inglewood, California: Arbor Vitae and Glenvillea, and then La Brea and Manchester.

Airplane passengers got quite a view! 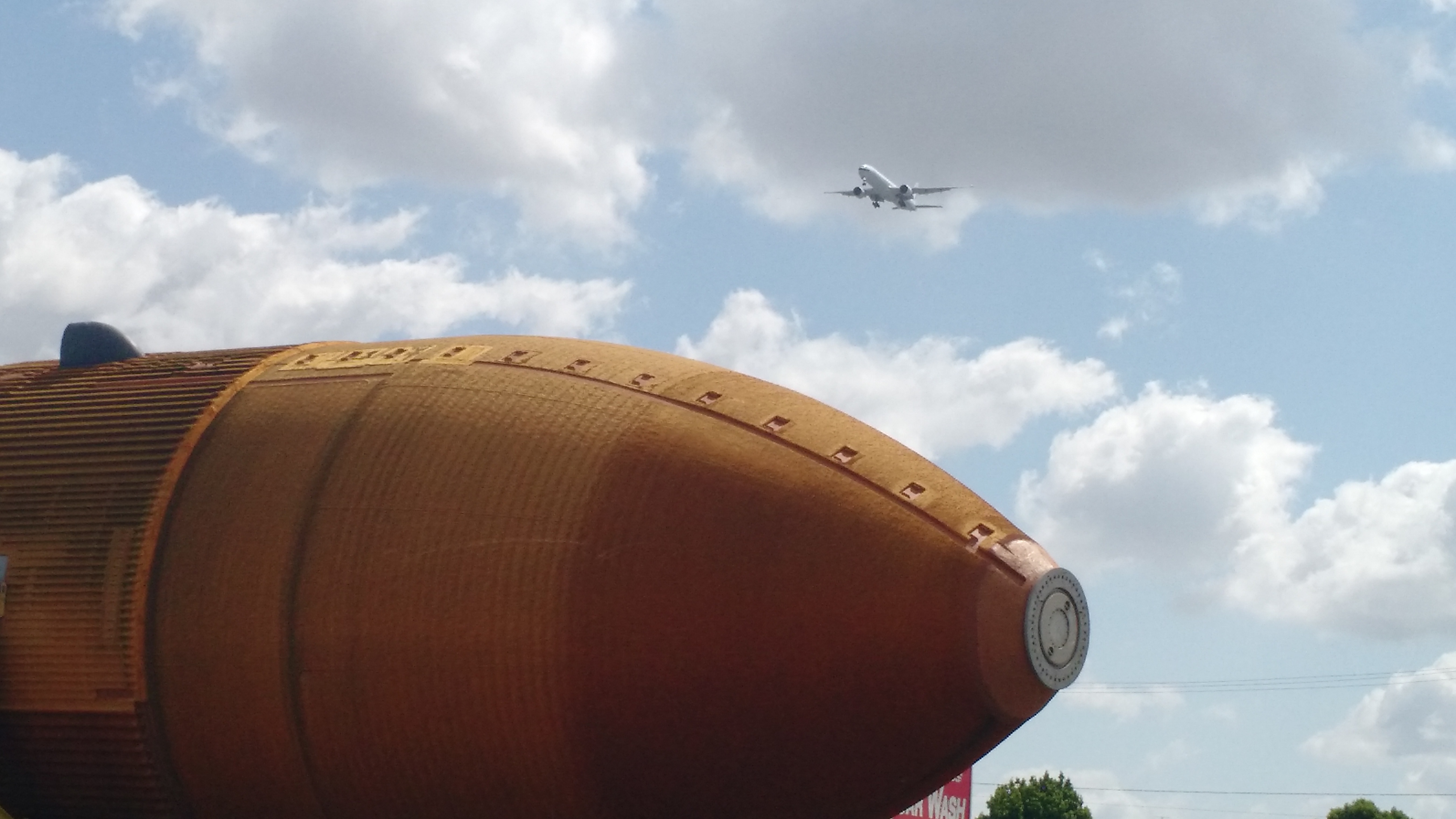 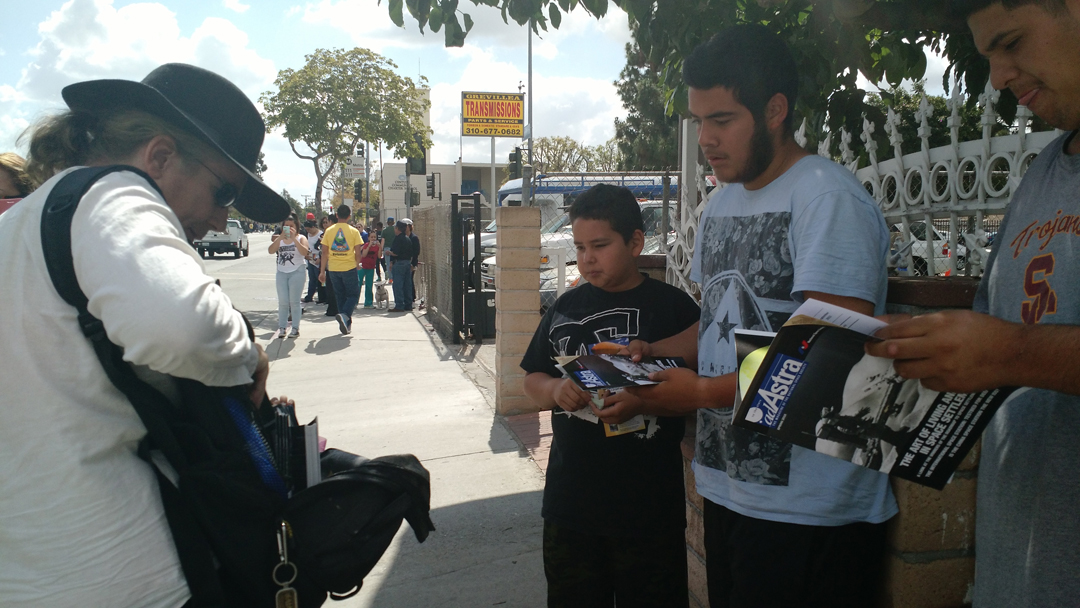 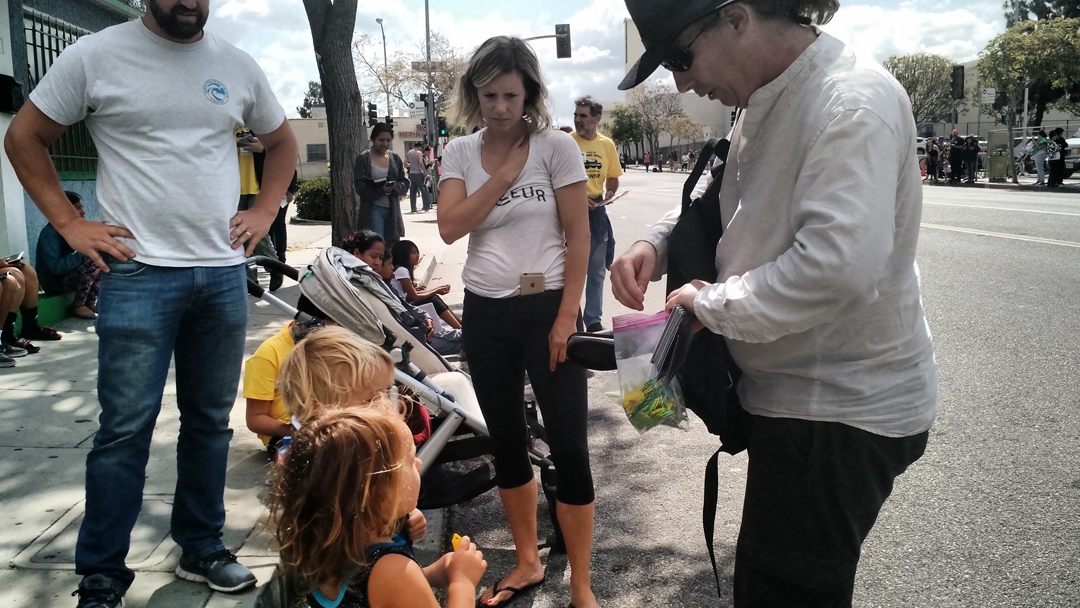 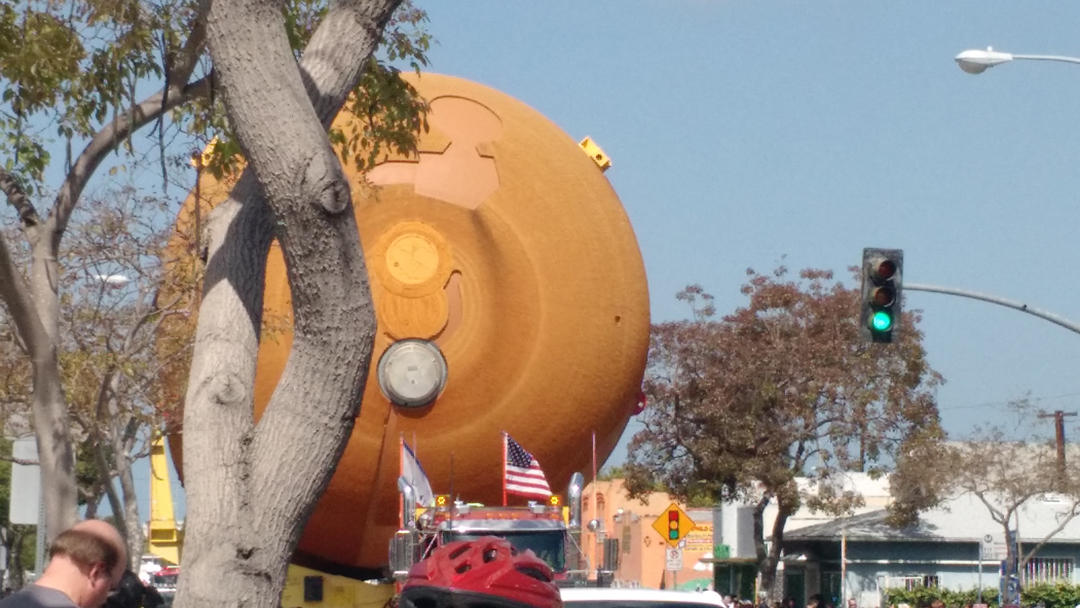 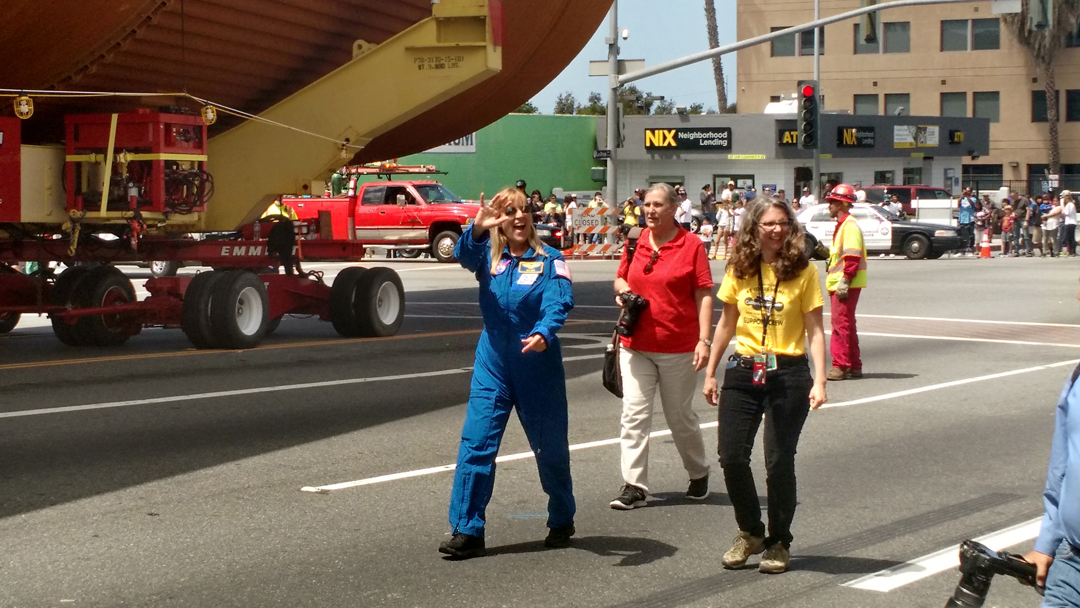 On May 6, SpaceX launched a Falcon 9 rocket. The first stage of the rocket carried the Japanese communications satellite JCSAT-14 to geosynchronous orbit, and then headed back towards Earth and a successful landing aboard the droneship “Of Course I Still Love You”.

This is the second time a first stage has successfully landed on a platform in the ocean.

A major difference is that the rocket carried its payload all the way up to geosynchronous orbit, so it had a much higher orbital velocity and greater re-entry heating. Less fuel was left to use in landing. A precise landing under these conditions is a much trickier proposition.

Will the recovered rockets in fact be reusable? We’ll see when SpaceX attempts to fly the first stage that just landed. SpaceX has a busy launch schedule ahead…

For more details and video, visit

On December 21, SpaceX launched a Falcon 9 rocket and landed it vertically on solid ground, at Cape Canaveral, FL. This is the first vertical landing on the ground of the first stage of a rocket from an orbital flight.

The rocket carried a payload consisting of 11 ORBCOMM satellites, and they were successfully deployed.

Here is the full webcast:

For more story and videos, visit

Posted on October 5, 2015 by Lisa Kaspin-Powell

Have you seen The Martian yet? It will be interesting to know what will be happening when we reach the same year as in that movie. Scientists are now answering people’s questions about Mars science, exploration, and so on.