Call for contributions to the OASIS website and The Odyssey

Here’s a call for contributions to the OASIS website and The Odyssey! Write about local space events and STEM events, and send us photographs too! The Odyssey has been on a long hiatus but is coming back – but material is needed! Thanks!

Congratulations to NASA and SpaceX for the successful launch and voyage of astronauts Bob Behnken and Doug Hurley to the International Space Station!

On Saturday, May 30, 2020, at 12:23 pm PDT, a Falcon 9 rocket launched from the Kennedy Space Center, carrying Behnken and Hurley in the SpaceX Crew Dragon Demonstration Mission 2 (DM-2) capsule to the ISS. On Sunday at 7:16 am PDT, the capsule, which Behnken and Hurley named “Endeavour,” docked with the ISS, and the two came aboard 3 hours later.

This is the first time that astronauts have launched from US soil since 2011, the final flight of the space shuttle program. This also marks the first crewed flight aboard a SpaceX capsule – a major milestone for commercial spaceflight.

Remembering Leonard Nimoy on the 5th anniversary of his passing

Today marks the fifth anniversary of the passing of Leonard Nimoy, so I would like to re-post what I said on that day:
Leonard Nimoy may have played a fictional character, but his contributions to space exploration were very real. From inspiring those of us who grew up with Star Trek: TOS to his contribution to the Griffith Observatory in Los Angeles to his narration of IMAX films on space exploration, his work will live on into the 23rd century and beyond.

A moving tribute to Katherine Johnson

This cartoon pays tribute to how Katherine Johnson’s mathematical expertise helped carry NASA astronauts to the Moon and back.

(@Steve Breen is a Pulitzer Prize winning editorial cartoonist for the San Diego Union-Tribune. His cartoons can be found at GoComics and he also has a Facebook page.) 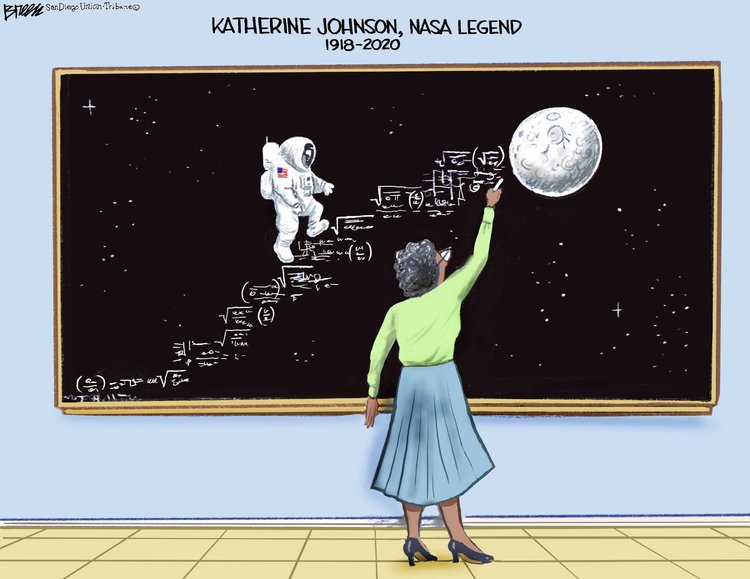 OASIS NSS says farewell and salutes Katherine Johnson, a barrier-breaking NASA mathematician who played crucial roles in (among many milestone accomplishments) Freedom 7, America’s first human spaceflight; and the first United States orbital spaceflight. Her pioneering work opened the doors of space exploration to women and people of color, and serves as a great inspiration to all. Johnson passed away at age 101 – a life well lived!

It’s been 50 years since the Apollo 13 mission, and 25 years since the premiere of the stunning dramatic rendition that brought the historic flight and its crew to life for a new generation. Nominated for nine Academy Awards®, including Best Picture, the real-life space flight that gripped the nation and changed the world is returning to theatres for a special in theatre event in honor of the anniversary of both the movie and the mission.

It had been less than a year since man first walked on the moon, but as far as the American public was concerned, Apollo 13 was just another “routine” space flight – until these infamous words pierced the immense void of space: “Houston, we have a problem.” Produced by Brian Grazer and directed by Ron Howard, Apollo 13 stars Tom Hanks, Kevin Bacon, Bill Paxton, Gary Sinise and Ed Harris in NASA’s epic operation to save the lives of 3 astronauts battling to survive an ill-fated mission to the moon.

Join your friends and family, young and old for an Apollo 13 experience that only the big screen can deliver!

Today is the 55th Anniversary of John Glenn’s Friendship 7 Flight!

On this day in 1962, United States Marine Lieutenant Colonel John Glenn became the first American to orbit the Earth aboard his Mercury spacecraft, Friendship 7. It was the third flight of Project Mercury following two sub-orbital flights, and the first to use the more powerful Atlas ICBM booster rocket. The flight plan called for between three and seven orbits. However, Glenn made only three orbits, as a sensor indicated that his vital heat shield might have been coming loose. He was forced to make an unorthodox reentry into Earth’s atmosphere while leaving the retro-rocket package, a device strapped over the heat shield used to slow the spacecraft for the return home, in place instead of being jettisoned. It was hoped that the straps would hold the shield in place. After reporting “a real fireball outside”, there were a few tense minutes as Glenn flew through an expected communications blackout. Soon after, John Glenn radioed that his parachutes were deployed and he made a safe splashdown in the Atlantic Ocean. The flight lasted just under five hours. It was later determined that the heat shield sensor was faulty. 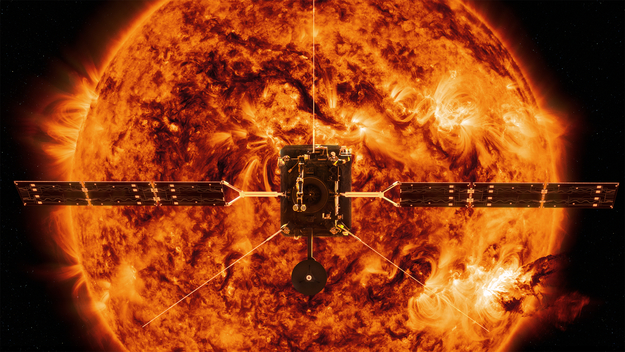 On February 10, the European Space Agency’s (ESA) Solar Orbiter blasted off atop an United Launch Alliance Atlas V from Cape Canaveral. Over the next 7 years, the Solar Orbiter will capture the first-ever images of the Sun’s poles and its far side, gathering data about solar activity. Specifically:

Advances in heat shield technology will enable the 10 science instruments to collect more data in real time at 26 million miles away from the Sun; this proximity is necessary to gather data about how the heliosphere is generated and controlled.

These data will complement the Parker Solar Probe as well as ground telescopes to give us an unprecedented global view of the Sun.

The ESA is leading the mission, with considerable participation by NASA.

ISDC 2020 has been cancelled due to safety concerns related to the COVID-19 pandemic.

Reminder! OuteRimCon – the MiniCon – Exploring the Imagination of Science! February 29, 2020 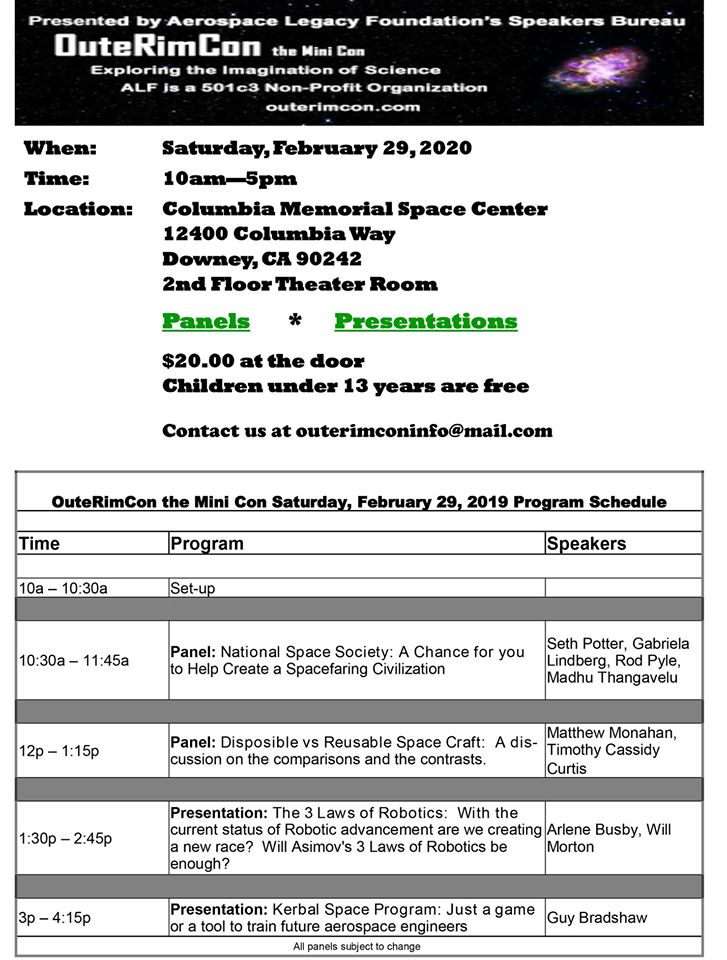