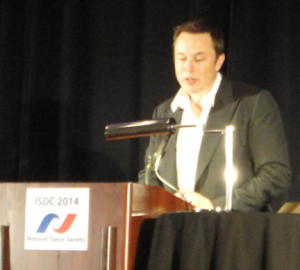 A major highlight of this year’s ISDC was the awarding of the 15th Biennial Robert A. Heinlein Memorial Award to Elon Musk. The NSS membership had voted for Musk by a very large margin during the balloting in late 2013. Many of our members recognize that he is working directly to accomplish some of the very goals for which NSS members have advocated, such as creating a family of reusable rockets to drive launch costs down. After the award was presented, NSS Executive Committee Chairman Mark Hopkins read a special commendation for Musk from the Committee, which included a phrase created years ago by Dr. Arlan Andrews: “The rocket took off and landed vertically, like God and Robert Heinlein intended.”

The Space Pioneer Awards recognize those individuals and teams whose accomplishments have helped to open the space frontier. The awards are divided into thirteen categories. The intent is to recognize those who have made significant contributions in different fields of endeavor to “develop a spacefaring civilization that will establish communities beyond the Earth.”

Professor John S. Lewis, Professor Emeritus of Planetary Sciences and Co-Director of the Space Engineering Research Center at the University of Arizona, was recognized for his major contributions to the study of the formation and chemistry of asteroids and comets, and his work in explaining and promoting both the risks and benefits asteroids offer. His popular books, such as Rain of Iron and Ice and Mining the Sky, have contributed in a major way to public understanding of space dangers and space resources. 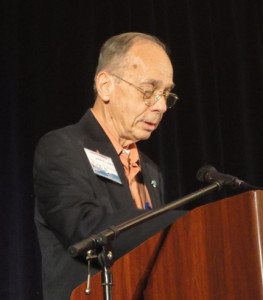 Gwynne Shotwell, President and COO of SpaceX, was honored specifically for her excellent day-to-day management of SpaceX business, as an effective spokesperson, and in leading the sales of nearly $5 billion in launch services business to a global set of customers. 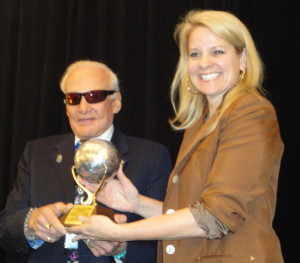 The Orbital Sciences Antares/Cygnus Team was represented by Frank DeMauro (Vice President and Program Director, CRS Program) and Mike Laidley (Antares Deputy Program Director).  They were recognized for the rapid creation of a reliable launch vehicle and spacecraft combination that could resupply the International Space Station. 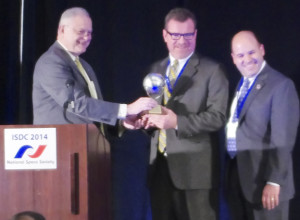 The Mercury MESSENGER team was represented by Principal Investigator Sean Solomon, Deputy Principal Investigator Larry Nittler, and Project Scientist Ralph McNutt.  The MESSENGER (MErcury Surface, Space ENvironment, GEochemistry, and Ranging) is the first spacecraft to orbit Mercury and conduct an extensive scientific survey of the entire planet.  The team spoke of their findings during the NASA Space and Exploration Track.  They found water ice and organic chemicals at the poles, and also that Mercury’s magnetic field is offset to the north of its equator. Mercury’s surface was found to be rich in magnesium, suggesting volcanic activity comparable to conditions on an early Earth. Mercury’s surface was also found to contain high amounts of volatiles such as sulfur and potassium – indeed, ten times the amount of sulfur found on Earth and Mars. 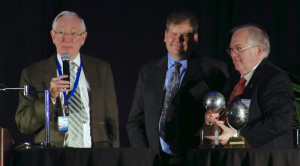