Mars Day 2014 was a load of fun for the general public who attended, especially the children. Our intrepid National Space Society OASIS volunteers who helped the Mars Society worked very hard, as did all the other volunteers. Congratulations to everyone on a job well done! 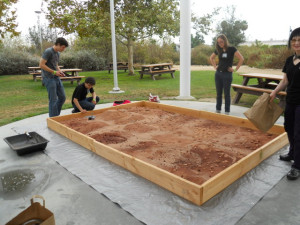 I helped out on the driving a Mars rover activity, and it was a blast! The radio controlled cars used had 3D printed panels to make them look like the Spirit and Opportunity rovers, traversing an impressively sculpted landscape littered with impassable rocks. All ages had a go at a deceptively simple task; to navigate from the lower right starting point to two checkpoints (at craters) and finally to the giant Olympus Mons volcano on the center left.

If you missed Mars Day 2014, I strongly suspect from the positive response there will be a Mars Day 2015. If you can’t wait that long then we have some NEW EVENTS on the way, such as our picnic at the Shuttle Endeavor, and an OASIS sponsored talk on the awesome technology of Space Elevators – which is FREE!

This entry was posted in MARS, OASIS. Bookmark the permalink.